The Reserve Bank of Australia ("RBA") cut the official cash rate to 0.10% at its meeting today.

In the end, this was no surprise to markets that had priced in the prospect of a drop.

This expectation has been reflected in market interest rates; with all short term rates approaching 0%, seriously. (see Money Markets below). This result may not please those that see a system already well stocked with liquidity.

Two key priorities remain firmly in the RBA's sights. Firstly, an eye on our currency (see Currency below) and secondly on their role in stimulating employment. Governor Lowe stated that his board wants to see more than just "progress towards full employment" and reducing unemployment is a "national priority". Strong words and this has been coupled with confirmation that interest rates are likely to be low for some time.

How will this be passed on?

It is challenging to see that this rate cut will be universally passed on to borrowers. Why?  Banks have already been pricing off market rates that have been lower than the official cash rate for some time. There is not a lot more margin to give; perhaps we may see more offers around fixed interest rate pricing. Let the politics begin.

From an economic perspective there will be a lot of data to follow on the road ahead.

The data from ANZ's annual results were insightful. Over the last six months, $21 billion has been added to savings, another $6 billion to offset accounts. In the last three months, their number of mortgage deferrals is down by 40% too. Westpac's results just released showed similar trends in loan deferral reduction. Positive.

Supporting this more broadly, the vast majority of housing loans remain in positive equity as recent RBA data shows, this should cushion any further impact to the banks as deferrals come off and we see what the real impacts are.

In short, a good share of any interest rate savings or other incentives (tax etc.) are being saved or used for debt reduction. As I have said previously, this has been a good thing in terms of getting household balance sheets in better order as the graph shows us below.

An obvious data point during economic downturns is to look at employment data.

The hardest place is the Melbourne CBD, followed by Sydney & Brisbane CBD's where in the case of Melbourne, 10% of jobs have been lost in the last six months alone.  When digging into the GDP numbers, the CBD's are an obvious recent drain.

Though many forward thinking economists are seeing a potential "competitive advantage" for our cities if we can clear Covid more quickly than similar countries overseas.

Our cities are too good not to sustain, to that end it has been great to see motivated individuals and companies starting to put their voices and actions behind initiatives to get our way of urban life back eventually.

The latest ABS data showed Australia's Consumer Price Index (CPI) has increased 1.6% in the September quarter. This nearly reversed the previous quarter's fall and the end to free childcare was the biggest driver of the increase.

More interesting, when breaking this data up, we can see where prices have been changing. An obvious point is the demand for household goods. In other words, we have saved some stimulus as above but continued to consume a lot of it too. 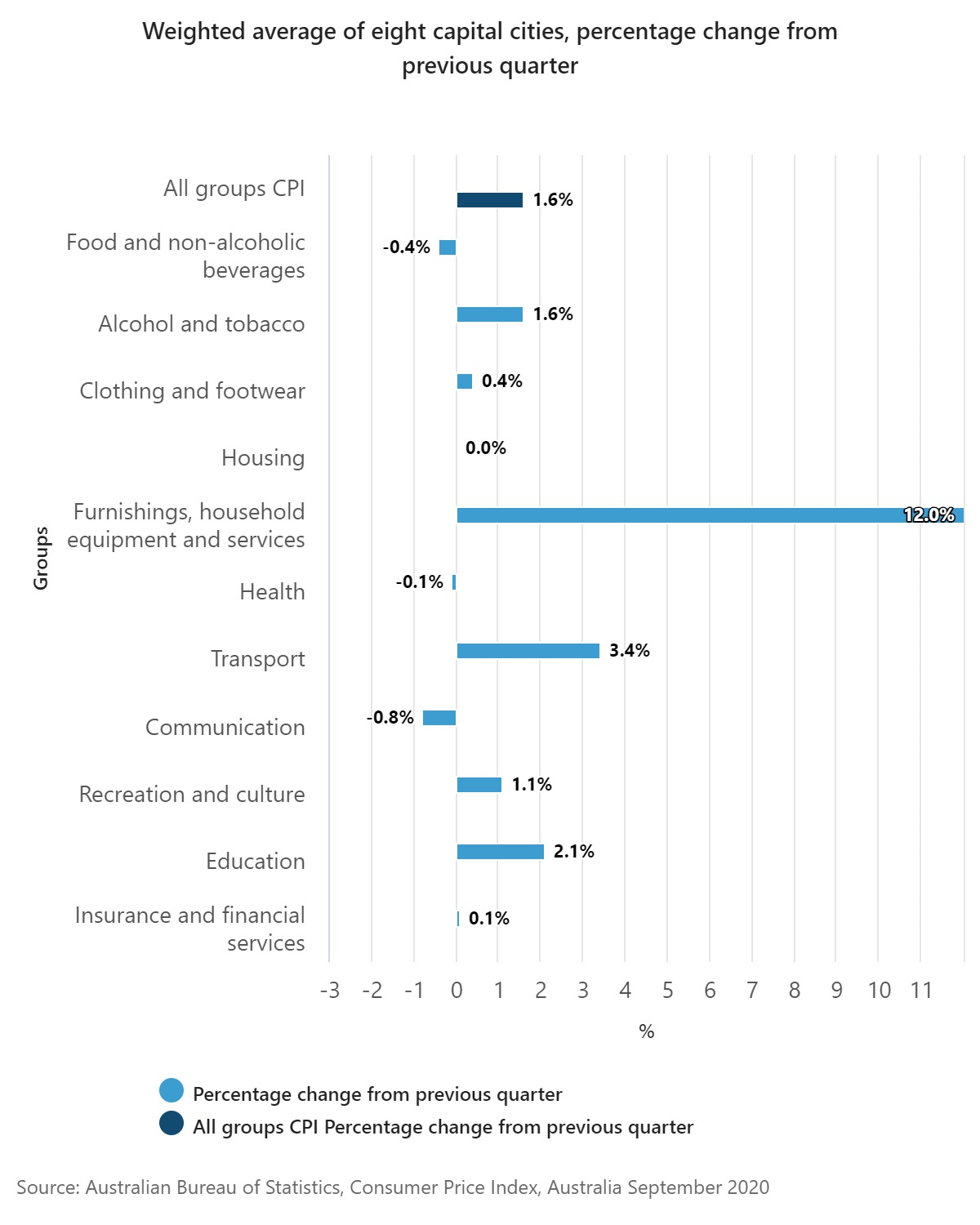 10 year money is very low but it may surprise you to know that it is one of the highest rates of western economies. With the potential impact that arbitrage has on our currency, we expect to see some intervention into these long term markets by the RBA to bring the yield down further.

Meanwhile, the market was processing the prospect of a rate cut as short term rates reach another new low.

In the residential market, data from CoreLogic listed below, continues a small fall in Melbourne, with increases in all other markets, including regional areas.

This trend is not following the many of the initial indicators from the start of 2020, when there was expectations of greater falls across residential property.

It may be that the market is more resilient than we all thought, or there some downward adjustments to come during 2021 as Government support tapers off.

More interesting data from CoreLogic below highlights the performance of property markets over a 10 & 20 year period, in both Nominal and Real (adjusted for CPI) terms.

These results are a timely reminder of how you need to move beyond the macro data when making property decisions.

The Commercial Office property story is developing.  More data is showing that vacancy rates for both the Sydney and Melbourne CBD's will exceed 10% by year's end.

Increasingly, tenants are looking for flexibility and not looking to make any long term commitments whilst uncertainty exists.

As a sweeping comment, landlords across most property segments remain optimistic that the demand for space will sustain. This view, combined by the general financial strength of commercial property owners, means that cracks in the market won't appear in the short term.

This shows up in the current volumes of "for lease" as opposed to "for sale" commercial property opportunities.

The currency weakened a little this month mainly on the back of a stronger USD.

There seems to be a bigger strategy playing out in currencies.  China, forever driving devaluation of their own currency, appears to be shifting gears and promoting the yuan as a global one.

Traditionally, the US government wanted a strong greenback as a symbol of strength as the global reserve currency. There are signs that these roles are starting to shift.

More broadly, there is a collective pressure on most modern economies to devalue their currencies. One analogy is a classroom where students "dumb down" for fear of being ostracized for being too smart.

Clearly, currency levels (with a low one keeping our local produced goods competitive) is at the forefront of the economic pulse.

The impact of this is far-reaching, including for interest rates. As a example, the RBA is likely commit to buying a quantity of long-term bonds with the objective to lower interest rates.